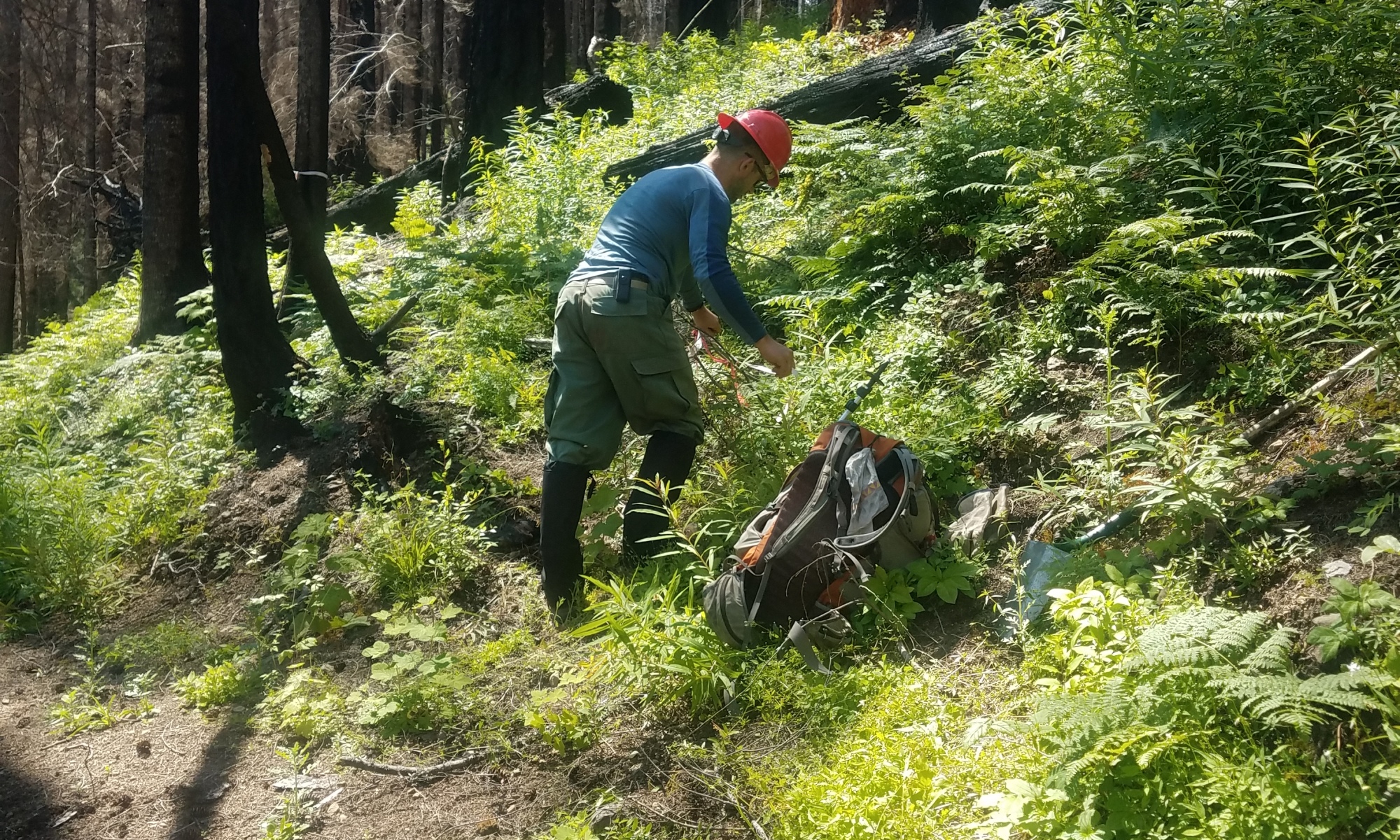 *Eagle Creek is a closed trail. We are working there as volunteers with the Forest Service, with their express permission. Please don’t go into the trails before we have them open again, it’s really dangerous.*

Eagle Creek Trail in the Columbia River Gorge National Scenic area was ground zero for the September 2017 fire that burned nearly 50,000 acres, primarily in Oregon. It’s been closed for almost two years as the Pacific Crest Trail Association volunteers and the U.S. Forest Service have been working to clear logs, rockslides, and fix other damage to the trail.

Eagle Creek trail was originally blasted out of andesite lava cliffs in many sections back in 1915. They even used explosives to create a walking tunnel through rock behind a spectacular waterfall, now known as Tunnel Falls. The trail follows the creek from above (Wahtum Lake end) and from below (close to the Columbia River). It features sheer cliffs, dizzying drops, so many waterfalls, and eagles flying high over the creek. It’s a true jewel of the Gorge.

I’m a freshly minted Trail Work Assistant Crew Leader with the PCTA, so when the chance came up to co-lead a group down into EC from the South, I volunteered right away. We’ve been working on the lower trail for much of 2019, and it’s actually quite passable (and still closed) up to the missing bridge at High Creek, about four miles from the trailhead.

I’ve worked a lot in the burn area the last two years, so I was pretty excited to see how the upper trail fared over the last year since we worked on it in 2018. It’s a long haul into Wahtum Lake, a beautiful blue body of water surrounded by old growth trees and the convergence point for several trails. The PCT passes through here, and the Herman Creek trail ends here, 4,000 feet higher and 11 miles from the river where it starts.

To support a multi-day crew going in the next day, our mission was to hike in six or seven miles, with a full complement of fairly heavy trail tools and create a tool cache for the crew coming next.

Early morning at Wahtum Lake and I’m unloading tools, helping make sure everyone signs the paperwork. We work as Forest Service Volunteers, so we follow their regulations and procedures. We cover the Job Hazard Analysis (JHA), determine our first aid person, check our radios, and do a host of other preparation steps. There’s three ‘Susans’ on this crew, how fun!

We have introductions, I see many familiar faces and a few new ones, and we’re loaded up and headed down to the Pacific Crest Trail. Here the PCT wanders through enormous old growth Doug Firs, and has a side option for taking the currently closed Eagle Creek Trail. We duck under the ribbon, and our group of Sherpas for the day heads out.

The entirety of the Eagle Creek Trail has been closed since September 2017, now almost two years. The South end of the trail saw a lot fewer boots when it was open than the Gorge end, back nearer to the super popular Punchbowl Falls. This end is always a bit wilder, less tamed than the trail before Tunnel Falls.

Now, it’s entirely overgrown in parts, vague and hard to follow. The fireweed is over my head, the Indian Mountain turnoff invisible. We’re quickly back into the burn area again, blackened trunks surrounded by swaths of green as nature renews. 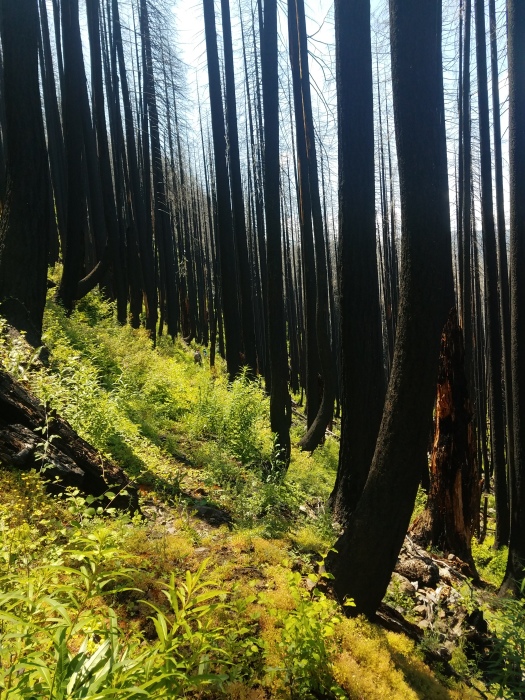 I take the heavy steel rock bar in trade from another volunteer as we work our way down. It’s not enough to begin to move a refrigerator sized boulder laying across the trail. It’s the kind of rock that makes me wish we used explosives, we will have to dig it out and rig it with cables – but not today. 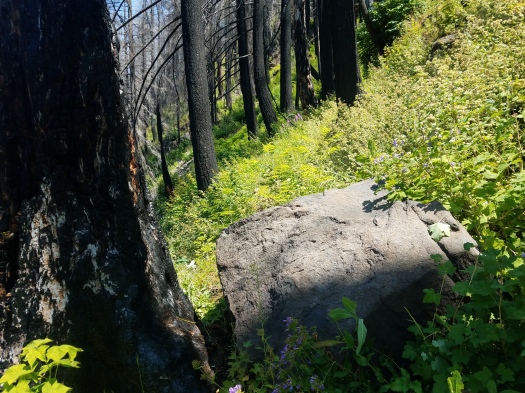 From this part of the Eagle Creek Trail, you have a great view looking up at the ridge where the PCT leaves Wahtum Lake, passing Chinidere Mountain, as it meets the Benson Plateau. We took over one hundred logs off that section last year, in just two days, but that’s literally another story. Tanner Butte looks still severely damaged, worst burn I’ve seen. I see the ridge we climbed two years ago, where I fell and nearly died. These hills hold a lot of personal history for me.

Looking up to Benson Plateau from Upper Eagle Creek Trail

Our mission half completed, we leave an assortment of tools well off the trail, wrapped in Tyvek. It’s just the long hike back up the hill, and I lead us off.  The afternoon sun is blazing hot, beating down on us in long pants, work boots, and long sleeves. Wearing your hardhat all the time is mandatory working in the burn area, outside camp.  At least I’m not carrying the long rock bar now, easily fifteen pounds of steel.

Thankfully, once we clear the severe burn, it’s cool with ample streams for water.  We use a Steri-pen and drink straight from the streams after treating the water. Ten foot tall Devil’s Club threatens to choke out the trail, that’s a future project. 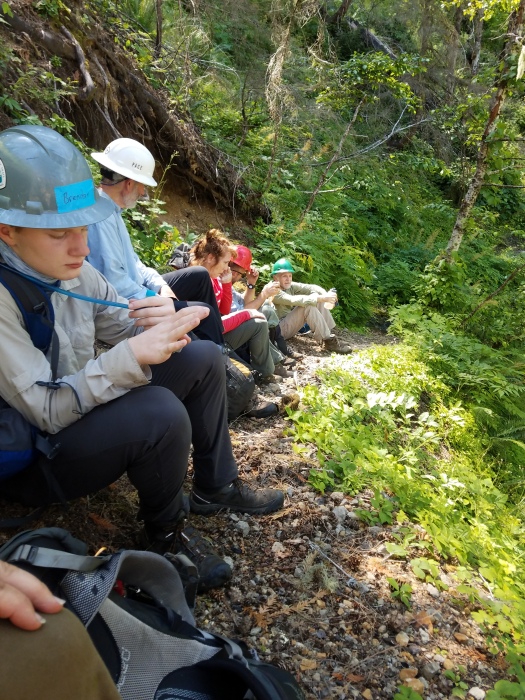 Taking advantage of what little shade we had climbing out 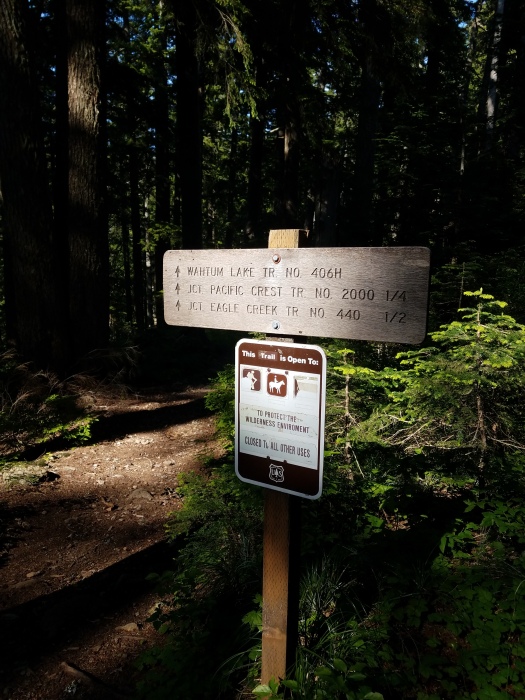 Finally, we’re back at Wahtum Lake, and ready for the long drive home.  Bob was kind enough to pack a cooler filled with ice cold non-alcoholic beverages, and a Lacroix is gone thirty seconds after I open it.  The next month, we have two work parties, and the third in August.  We’re really working this section hard now, while we wait for bridgework. My first crew is done, a pretty easy one, and we didn’t leave anyone behind. 😉

***Eagle Creek Trail is closed and has many hazards*** 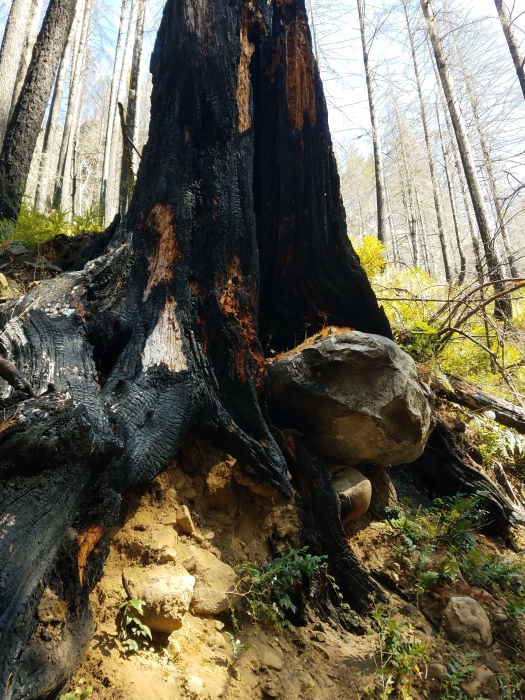 🏳️‍🌈 Forest Princess, Empress of the Gorge, #PNW adventurer. Yogini, poet, artist, hiker, skier, skater, runner, cyclist. I opened my heart to the universe in love, and it loved me back. <3 All photos are my own unless otherwise specified.